The government guest house in Mirzapur where Congress’ eastern Uttar Pradesh General Secretary Priyanka Gandhi Vadra has been taken to by government officials has been hit by a power outage.

Priyanka Gandhi Vadra was stopped in Uttar Pradesh on Friday on her way to a village in Sonbhadra where 10 people were killed in a shootout this week over a land dispute. The Congress general secretary sat on the road in Mirzapur and protested until she was taken away in a government car to the guest house.

The Congress party workers, who were there with her in Chunnar, alleged that the district administration was doing this to force her to leave the place.

Mirzapur: Priyanka Gandhi Vadra,Congress Gen Secy for UP(East)&party workers continue to sit on dharna at Chunar Guest House.She was detained in Narayanpur by police earlier today while she was on her way to meet victims of Sonbhadra’s firing case. 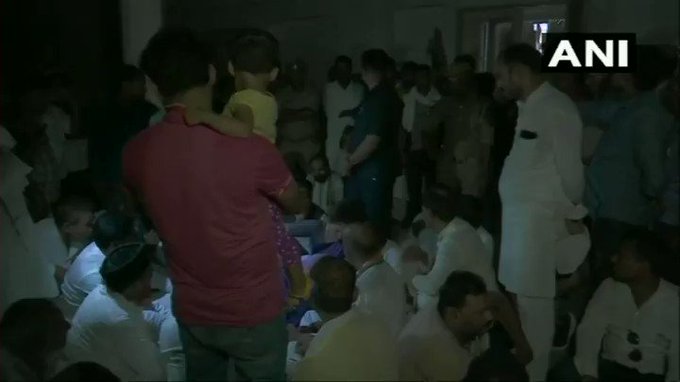 171 people are talking about this

“The district administration wants to trouble the Congress workers and force Priyanka Gandhi to go from here. But, no matter how much they trouble us, we are going to be here,” said Shiv Kumar Singh Patel, a Congress worker.

“We are going to spend the night in the light of a candle. Congress workers in the entire country are protesting against the way Priyanka ji is being treated,” added Mr Patel.

Congress leader Gulab Chand Pandey said: “The government thinks if there is darkness, people will go from here. We will not run away. We will not leave our leader. We will be here with Priyanka ji. Such a big incident took place and opposition leader is not being allowed to go there. Is this not the murder of democracy?”

During the power cut, Priyanka Gandhi was seen interacting with the people present at the guest house with the help of mobile phone lights. She was also seen taking selfies with some people.

She said earlier: “When the administration tells me why and on what basis I have been arrested, then I will decide about what I have to do next.”