An emotional Siti Aisyah, surrounded by government officials and reporters at the Ministry of Foreign Affairs in Jakarta, thanked her parents, President Joko Widodo and the Indonesian people for their prayers.
The decision came as a surprise to many, including Aisyah herself, and kicked off a dramatic day at the Shah Alam High Court.
Aisyah hugged her co-defendant, Doan Thi Huong of Vietnam, before leaving the courtroom. She later tearfully told reporters that she was “shocked” to have been freed after more than two years behind bars. The prosecutors gave no reason for their decision, her lawyer Gooi Soon Seng said.
The prosecutors did not ask the judge to drop charges against Huong, a decision her lawyer criticized as “unfair.”
The trial is due to resume Thursday, when prosecutors are expected to announce whether they will continue with the case against Huong. 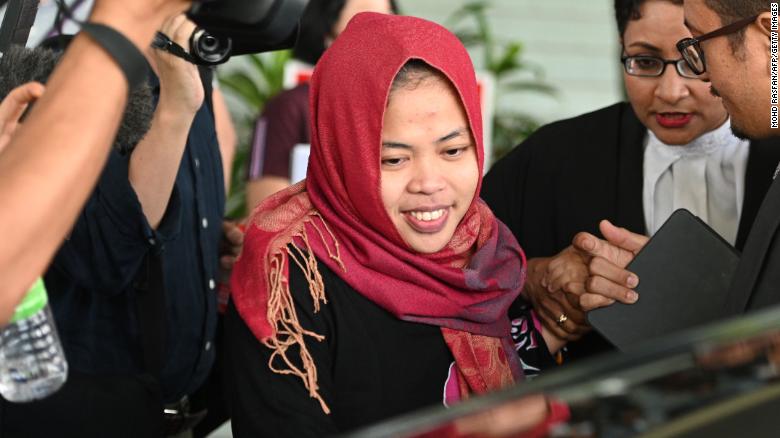 Indonesian national Siti Aisyah (center) smiles while leaving the Shah Alam High Court Monday.
Aisyah and Huong were charged with murdering Kim Jong Nam shortly after his death in February 2017, and faced the death penalty if convicted. Authorities say they exposed Kim to the nerve agent VX as he entered Kuala Lumpur International Airport, killing him in minutes.
Security footage shows a woman approaching him from behind, rubbing something on his face and then running away.
Lawyers for the two women have said they were duped by a team of North Korean agents, who tricked them into thinking they were taking part in a reality TV show.
Rusdi Kirana, Indonesia’s ambassador to Malaysia, said the decision to drop the case against Aisyah followed months of lobbying by Jakarta. The Indonesian Law and Human Rights Ministry released an image of an undated letter in which it requested that Aisyah be freed.
The letter repeated many of the arguments made by her defense attorneys. It also asked that Malaysian authorities take into account the two countries’ “good relations” when considering the request.
Malaysian Attorney General Tommy Thomas responded with his own letter Friday, announcing that the prosecution would effectively drop the case. Copies of both letters were released by Indonesian authorities and a spokesman for Thomas confirmed their validity. 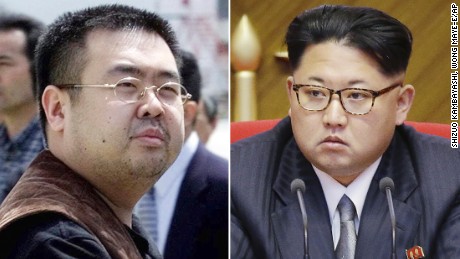 2017: Theories behind Kim Jong Nam’s murder 01:43
Four North Koreans have also been charged with Kim’s killing. Their whereabouts are unknown, and Interpol has put out red notices for each of them, asking governments around the world to send them to Malaysia to face trial.
It’s unclear why Kim Jong Nam was killed, but analysts said Kim Jong Un may have seen him as a potential threat. Kim Jong Nam fell out of favor with their father, former North Korean leader Kim Jong Il, nearly two decades ago and lived in self-imposed exile in the Chinese-controlled territory of Macau.
North Korea has consistently denied involvement in the killing, though United States, South Korean and Malaysian authorities have said it was in fact responsible for Kim’s death.
Monday was the first time Huong and Aisyah had spoken publicly in the more than two years they spent behind bars.
But Huong ended up only reading the first three lines of her prepared testimony in a tearful and stuttering tone.
Defence lawyer Hisyam Teh Poh Teik said she “was traumatized by the unfair decision” not to drop charges in her case, and her legal team had made a decision to stop the testimony.
“Doan (Thi Huong) was obviously disappointed,” Teh told reporters. “She was in no position to testify.” He said his team would request the withdrawal of the charge against her. 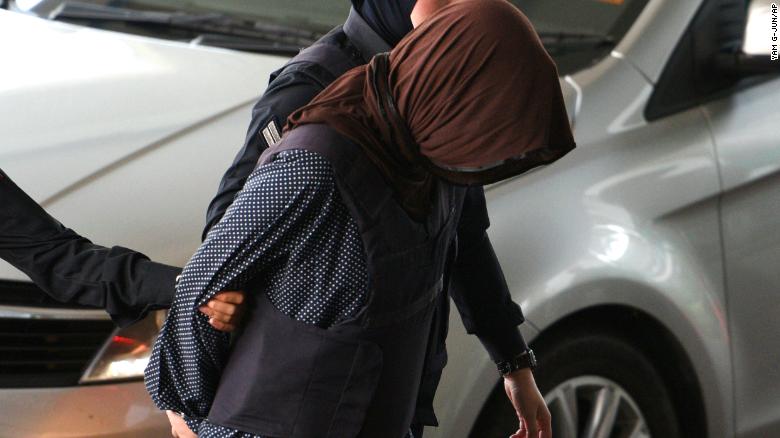 ‘Happy and so relieved’

Aisyah had a tearful reunion with her parents Monday.
Asriya, Aisyah’s father, said he was “touched and happy” about his daughter’s release. “A thousands of thousands thank you to all help we received. Thank you to Indonesia government that can release my daughter. Thank you President Jokowi. I pray for you, may God protect you, ” Asriya said, overcome with emotion. 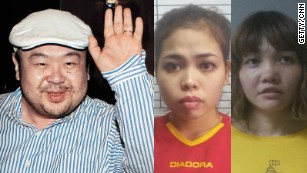 Kim Jong Nam: The plot to murder North Korea’s exiled son
Indonesia’s Foreign Ministry brought Aisyah’s parents to the capital ahead of her return.
Benah, Aisyah’s mother, said she was “happy and so relieved” that her daughter had been freed.
“Since the very beginning we believe that she is not guilty. Siti is innocent. That’s why we keep praying for her,” she said.
Benah said she didn’t know what would happen next, but she planned to “make sure that Siti will only work at home.”
Speaking earlier at the Indonesian embassy in Kuala Lumpur, Aisyah thanked her lawyers, Indonesian authorities and the Malaysian government for securing her release. “I did not expect that today will be the day of my freedom,” she said.

Kim Jong Nam’s murder triggered a heated three-week diplomatic row between Malaysia and North Korea, further isolating Pyongyang. Kim Jong Un was viewed by many at the time as a calculating and ruthless leader shrouded in mystery. It would be more than a year before his much publicized meetings with the leaders of South Korea, China and the US.
The diplomatic dispute ended after nine Malaysians effectively barred from leaving Pyongyang were allowed to return home and three North Koreans were permitted to leave Malaysia.
It’s unclear if Huong’s detention has caused any friction between North Korea and Vietnam, one of the relatively few countries to maintain diplomatic relations with Pyongyang.
Huong’s case did not appear to be publicly discussed during Kim Jong Un’s recent visit to Hanoi, when he met US President Donald Trump and Vietnam’s leaders.
In an interview last month, Vietnamese Prime Minister Nguyen Xuan Phuc appeared to play down tensions between his country and Pyongyang over the incident.
“This is an issue of the law. We also care about protecting the rights of our citizens, but both countries will discuss this specifically at a later time, not during this period,” he said.