New Delhi   Has called on the United States to investigate Pakistan’s alleged use of American-made F-16 jets during an aerial engagement last month that brought the two nuclear-armed neighbors to the brink of conflict.

“We have asked the United States to also examine whether the use of F-16 against India is in accordance with the terms and conditions of sale,” Indian foreign ministry spokesperson Raveesh Kumar told journalists at a media briefing on Saturday.
The Indian Air Force last Tuesday said Pakistan used F-16 fighter jets in the raid that brought down an Indian MIG 21 jet, in a possible violation of the terms of use by the US. 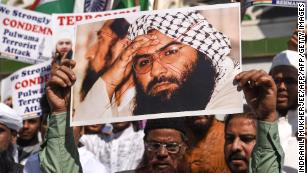 Pakistan denies terror clampdown is the result of Indian tensions
Indian officials said they recovered parts of an AMRAAM air-to-air missile that can only be used on those specific jets. Kumar said New Delhi has “eye-witness accounts and electronic evidence that Pakistan deployed F-16 aircraft” and claimed that one such jet was shot down by Wing Commander Abhinandan, the Indian pilot who was shot down during the confrontation and held in Pakistan custody for several days before being released last Friday.
CNN has not independently verified India’s claims.
Pakistan has stated that no F-16s were used in the operation, though it hasn’t specified what military equipment was involved.
As part of the purchasing agreement, the US puts certain restrictions on how its military equipment can be used. It is unclear what restrictions were placed on the use of Pakistan’s F-16 jets. 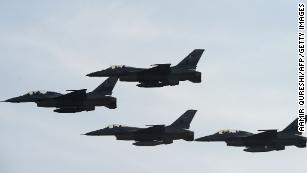 US looking into reports Pakistan violated arms agreement in Kashmir
A US Department of State official told CNN that it was “aware of reports” that the use of F-16 jets may have been in violation of the terms of use agreement and is “looking into them.”
Speaking at the US Institute of Peace in Washington, DC last Monday, Pakistan’s ambassador to the US, Asad Majeed Khan, said that he was not aware of any request from the US about the alleged use of F-16s.
“On F-16, I don’t know, India has been alleging so many other things. We don’t get into every single one of them. I am not aware of the request from the US side about the F-16,” he said.