Chennai: A statue of the late Dravida Munnetra Kazhagam (DMK) patriarch M Karunanidhi was unveiled at the party’s headquarters ‘Anna Arivalayam’ in Chennai by UPA chairperson Sonia Gandhi, in the presence of DMK chief MK Stalin and a host of Opposition parties leaders. The event has been dubbed as an anti-BJP alliance in yet another show of unity ahead of the Lok Sabha elections 2019. Congress President Rahul Gandhi also attended the DMK event.

Andhra Pradesh CM and TDP boss Chandrababu Naidu who played a pivotal role in bringing various regional leaders from the opposition together also attended the event. Kerala CM Pinarayi Vijayan and Puducherry CM V Narayanswamy are heavyweights were also in attendance. Rajinikanth, who had announced his entry into politics but yet to float a party, also attended the mega event. 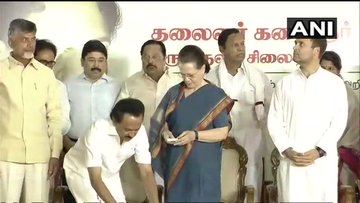 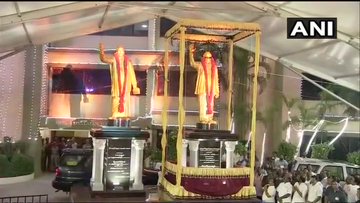 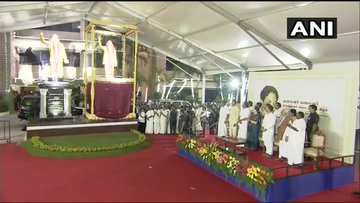 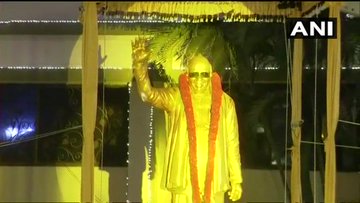 Meanwhile, post the unveiling of the grand statue, DMK President MK Stalin also presented mementos to UPA chairperson Sonia Gandhi, Congress President Rahul Gandhi, Kerala CM Pinarayi Vijayan, and Andhra Pradesh CM Chandrababu Naidu on Sunday. Speaking at the event, Stalin said, “In the 5 years of PM Modi’s rule, the country has gone 15 years back. If we give another chance to him, surely the country will go 50 years back. PM Modi is behaving like a king, that’s why we’ve all come together to safeguard democracy and country.” 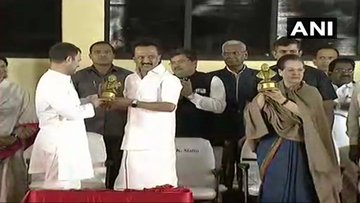 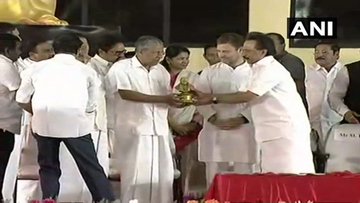 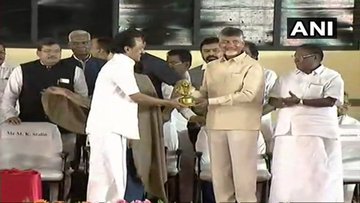 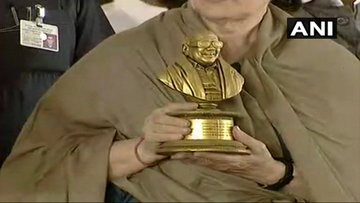 Touted to be a show of strength against the ruling-BJP, this is the second meeting after the one held in New Delhi, just a day before the state assembly elections for MP, Rajasthan, Chhattisgarh, Telangana and Mizoram were to be announced on December 11.

“A life-size statue of Kalaignar will be unveiled by all India leaders,” the DMK had earlier said in a statement. Karunanidhi passed away on August 7 this year aged 94 following a prolonged illness.