After Midnight March In Delhi, Farmers Call Off Protest

After midnight march in Delhi, farmers have called off their protest after reaching Kisan Ghat, the memorial of Chaudhary Charan Singh. They were allowed to enter the national capital around midnight after police unsealed the border between Delhi and Uttar Pradesh.

“The farmers remained unfazed despite all the hardships. We have been marching for 12 days now, farmers are tired as well. We will continue to demand our rights to the government but for now, we are ending the march,” Bharatiya Kisan Union (BKU) chief Naresh Tikait was quoted by news agency IANS as saying.

The farmers have started returning since early morning. Traffic restriction put across Delhi has also been lifted after the protest was called. However, schools will remain closed in Ghaziabad, which was ordered yesterday due to the protest.

On Tuesday, the farmers were stopped from entering the national capital which resulted in a violent clash with the police. They have been protesting as part of their “Kisan Kranti Padyatra” to demand loan waiver, subsidized electricity, and fuel, pension for farmers above 60 and implementation of recommendations of the Swaminathan Commission.

The march began from Tikait Ghat in Haridwar on September 23 and farmers from places as far as Gonda, Basti and Gorakhpur in eastern Uttar Pradesh and the sugarcane belt of western UP joined the agitation.

At least 30,000 farmers walked and traveled in tractors to Delhi as a part of the march. After police stopped them at the Delhi border, angry farmers tried to break the barriers and raised slogans forcing the police to use batons, tear gas shells and water cannons to disperse them. Several protesters and policemen were injured in the clash. 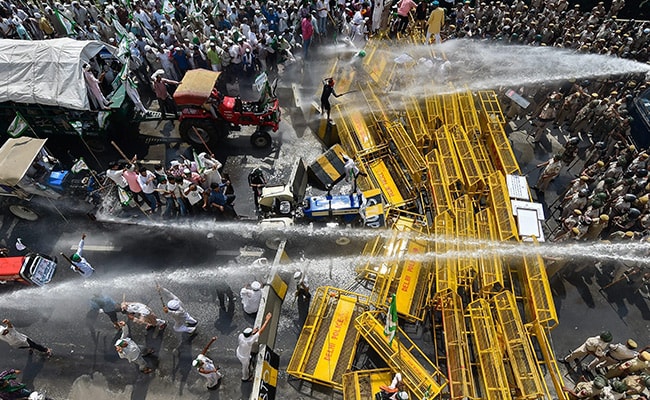 Gajendra Singh Shekhawat, Minister of State for Agriculture and Farmers Welfare, told news agency ANI that farmer leaders who met Home Minister Rajnath Singh and discussed their demands have reached an agreement on a majority of the issues.

But the members of the Bharatiya Kisan Union (BKU), which organized the farmers’ march, say that they haven’t reached an agreement on the full implementation of the Swaminathan report regarding the minimum selling price (MSP), and their demand of one-time complete loan waiver.

“We had a discussion on 11 points. The government agreed on seven and didn’t agree on the rest. They said they will discuss those points get us back to us as if it is a financial matter,” Yudhvir Singh, Bharatiya Kisan Union spokesperson, said.

The opposition parties have attacked the center over the police action that left many farmers bleeding. They also criticized the government for what they call as “unfulfilled promises” and increasing farmer distress. 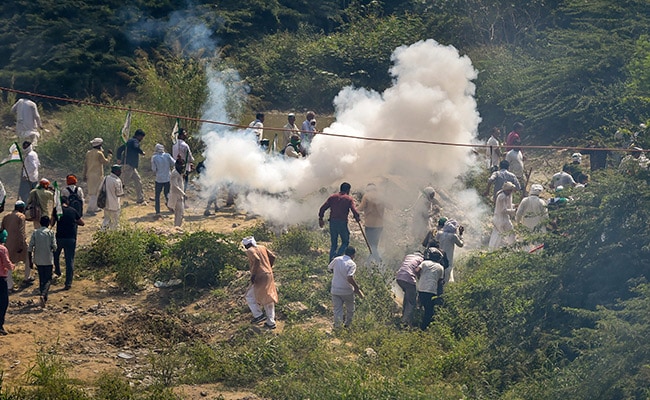 On International Day of Non-Violence, the BJP’s Gandhi Jayanti celebrations began with an attack on farmers who were peacefully marching to register their protest, Congress chief Rahul Gandhi said. “Now the farmers can’t even express their anguish,” he tweeted.

“Peaceful and unarmed farmers going towards Raj Ghat were brutally treated, they were lathicharged and teargas shells fired on them. We condemn this,” KC Tyagi of Janata Dal (United) said.

The Congress party’s youth wing tweeted, “Is this the India Gandhi ji dreamt and died for? Modi govt forcibly bans farmers from sharing their problems with the govt. Is India not a democracy? Just shows that BJP govt only supports their rich friends and no one else; not the youth, or women or farmers! Shame.”

Former UP Chief Minister Akhilesh Yadav also supported the farmers’ rally. “This government has not fulfilled the promises it made to the farmers, so it is natural that farmers would protest. It is unfortunate and we fully support the farmers,” the Samajwadi Party chief said.

“Instead of providing relief to farmers, they are exacerbating the crisis. We haven’t seen such an agrarian distress in India since independence,” said CPI(M) leader Sitaram Yechury. 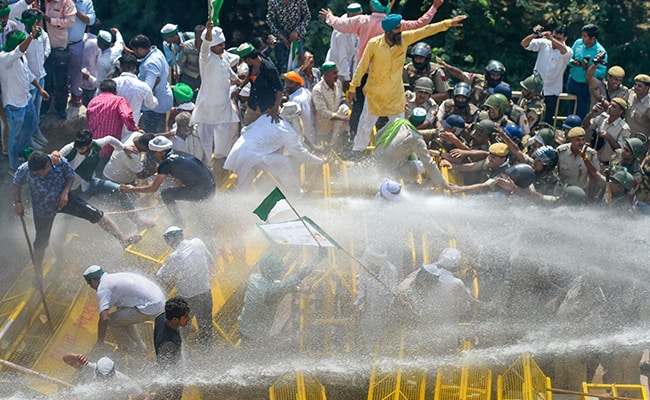 “We are not seeking freebies from the government. We want what we deserve,” said Harmik Singh, a farmer from Meerut.

Gurudev Singh, 89, isn’t getting the right price for his produce and the increasing prices of diesel and electricity have added to his problems.

45-year-old Yasin Khan from UP’s Muzaffarnagar was among those hit by tear gas shells. His family of eight is dependent on sugarcane farming for whatever money they make.

“The brutality of the police and the Modi government on unarmed farmers is unacceptable. We walked peacefully for 250 km and they couldn’t even tolerate us here for the rest of our journey. We don’t have money to send our kids to school. We don’t even have enough to feed them,” Mr. Khan said.