Tamilisai Soundararjan, the Bharatiya Janata Party’s Tamil Nadu president, was left fuming today by a co-passenger on a flight — whom she accused of calling the BJP government “fascist”.

Soundarrajan was filmed talking to the woman, Louis Sophia, in the arrival lounge of the Tuticorin airport. Later, she can be seen complaining that Sophia, a doctoral student of Physics at the University of Montreal, said, “Down with the fascist BJP government.”

Soundarrajan, who is visibly furious, says this happened when she was collecting her baggage inside the cabin. “Is this freedom of expression?” she asks. 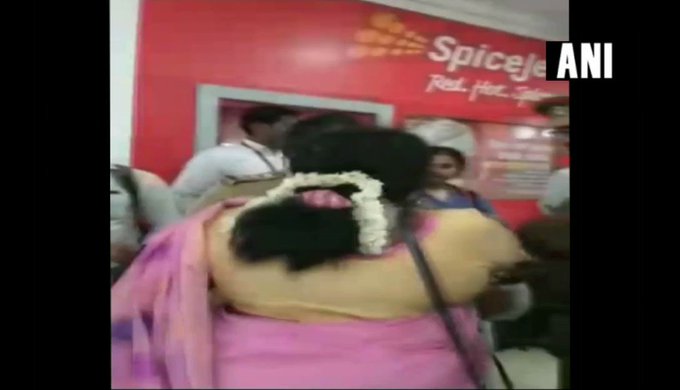 The police have arrested Sophia, who is from Tuticorin and had come there on vacation. They did so on Soundarrajan’s complaint. Sophia has been charged with causing public nuisance and a breach of public peace under sections of the IPC and the Tamil Nadu City Police Act 1888.

Soundarrajan told reporters Sophia “had no right” to raise such slogans inside a flight and in front of co-passengers.

She said she had suspicions about Sophia’s background.

“It didn’t seem to me like she was an ordinary passenger. I think it was a situation where my life was in danger. The way she stood up, raised her hand and raised slogans…I suspect there must be some organization behind her.”

Sophia’s father has come in her defence and said that she said “Fascist BJP down” and moved away. It was, however, Soundarrajan and her supporters who rounded them up, he has alleged.

“Police have kept my daughter Sophia in the station for inquiry for more than eight hours. They first informed us that they will book her under non-bailable sections and leave her on station bail, but now, they ask us to approach the magistrate for bail,” Sami, father of Sophia, said.

“She did not use any derogatory remarks against Soundarrajan,” he said, adding that saying “Fascist BJP down” is purely Sophia’s freedom of expression.

Sami has now lodged a complaint against the BJP Tamil Nadu chief for threatening Sophia and her family. No action, however, has been taken yet.

Sophia has been remanded for 15 days of judicial custody.

Meanwhile, newly-appointed DMK chief MK Stalin has condemned the arrest of Sophia. In a tweet, he has accused the Tamil Nadu government of failing to protect a citizen’s freedom of speech. “Sophia should be immediately released. You will have to arrest lakhs of people who raise slogans like this. I will also raise the slogan. “BJP fascist govt down”,” Stalin said on Twitter.