Rashtriya Janata Dal (RJD) leader and former Bihar deputy chief minister Tejashwi Yadav has hit out at Chief Minister Nitish Kumar over the transfer of Satya Pal Malik and Superintendent of Police JP Mishra. The Yadav scion pointed that decision to transfer the police officer was taken a day before he was slated to submit a report on the Muzaffarpur shelter home rape case.

Claiming that the investigations into the mass rape case were reaching government offices in Patna, Yadav tweeted, “So after Bihar Governor, CM Nitish also got CBI SP transferred. The next day he wud have submitted the progress report on the MuzaffarpurShelterHome mass rape case in High court. The investigation was reaching to “Patna Sir” mentioned in Brajesh Thakur dairy. Chacha, wait & watch, Who’s he?” 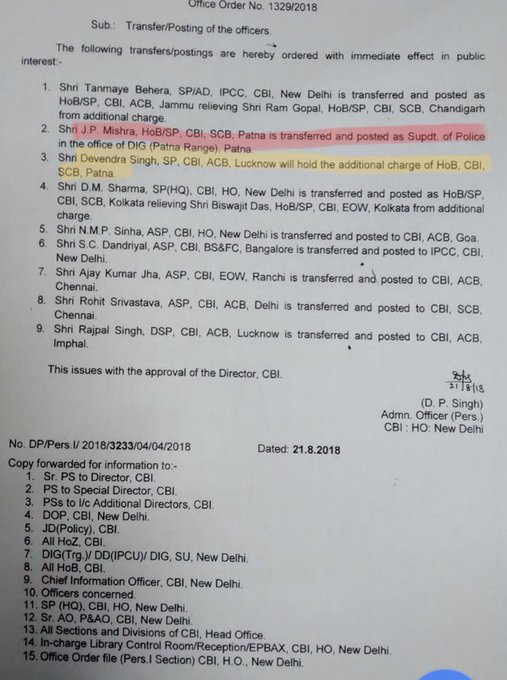 The investigation was reaching to “Patna Sir” mentioned in Brajesh Thakur dairy.

The RJD leader had tweeted, “Nitish Ji, When you are expelling your cabinet colleague for 10 years and Vice-President of JDU in connection with Brajesh Thakur? If his son has been suspended then why he is spared? What relation ur party JDU shares main culprit of # MuzaffarpurShelterHome? Where is morality? (sic).”

An FIR was lodged against former social welfare minister Manju Verma and her husband Chandrasekhar Verma under Arms Act after the Central Bureau of Investigation (CBI) conducted raids at various locations across the state, including the residences of the former minister in Patna and Begusarai. The agency had seized 50 cartridges during the raids.

The CBI also questioned former minister Damodar Rawat, who was the social welfare minister in the first term of the NDA government in Bihar, for alleged connections with Muzaffarpur shelter home case prime accused Brajesh Thakur.